Spurlock Museum at the University of Illinois at Urbana-Champaign

Spurlock Museum at the University of Illinois at Urbana-Champaign 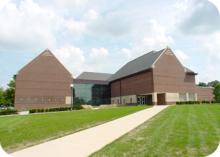 With approximately 40,000 objects in its artifact collecdtion, the Spurlock Museum celebrates our shared humanity by collecting, preserving, documenting, exhibiting, and studying objects of cultural heritage. The Museum's primary function is education in service to students, scholarly communities, and the general public, interpreting the diversity of cultures through time and across the globe. Its collections constitute a public trust to be responsibly maintained for future generations as a permanent record of the cultural world.